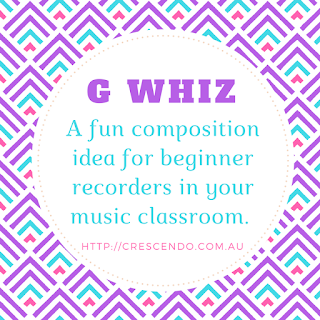 I came up with this simple idea and ‘G’ it worked well so I thought I would share.
I am sure you have all done versions of this before, but in case it gives you a new idea, or variation to your ideas, here it is...

We are beginning recorder and I wanted to spend time playing our first note and focusing on tone, but I also wanted to make it creative and interesting.I witnessed some great learning, creating and discussing. 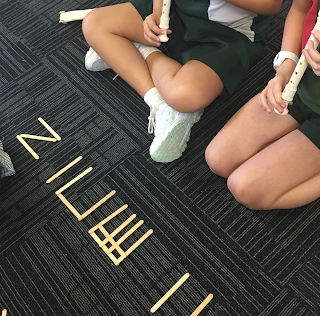 This was a much more 'musical' experience than I had anticipated. Beginning recorders are often not the most beautiful sound, and all playing at different times...well I was a bit worried, but the playing was lovely and gentle (of course I did set that up as best I could). The students were genuinely interested in what rhythms others had written.

Another great outcome from the activity was the fabulous discussions. I heard students working on playing together, how they would count in, where they made errors, which parts they wanted to change and why and what they liked about the compositions of others.

Honestly, I thought it would be an interesting way to practice known rhythmic elements at the same time working on tone and playing the one note we had just learnt on recorder, but I really didn't expect it to be such a great learning experience.
Posted by Crescendo Music Education at 5:19 PM